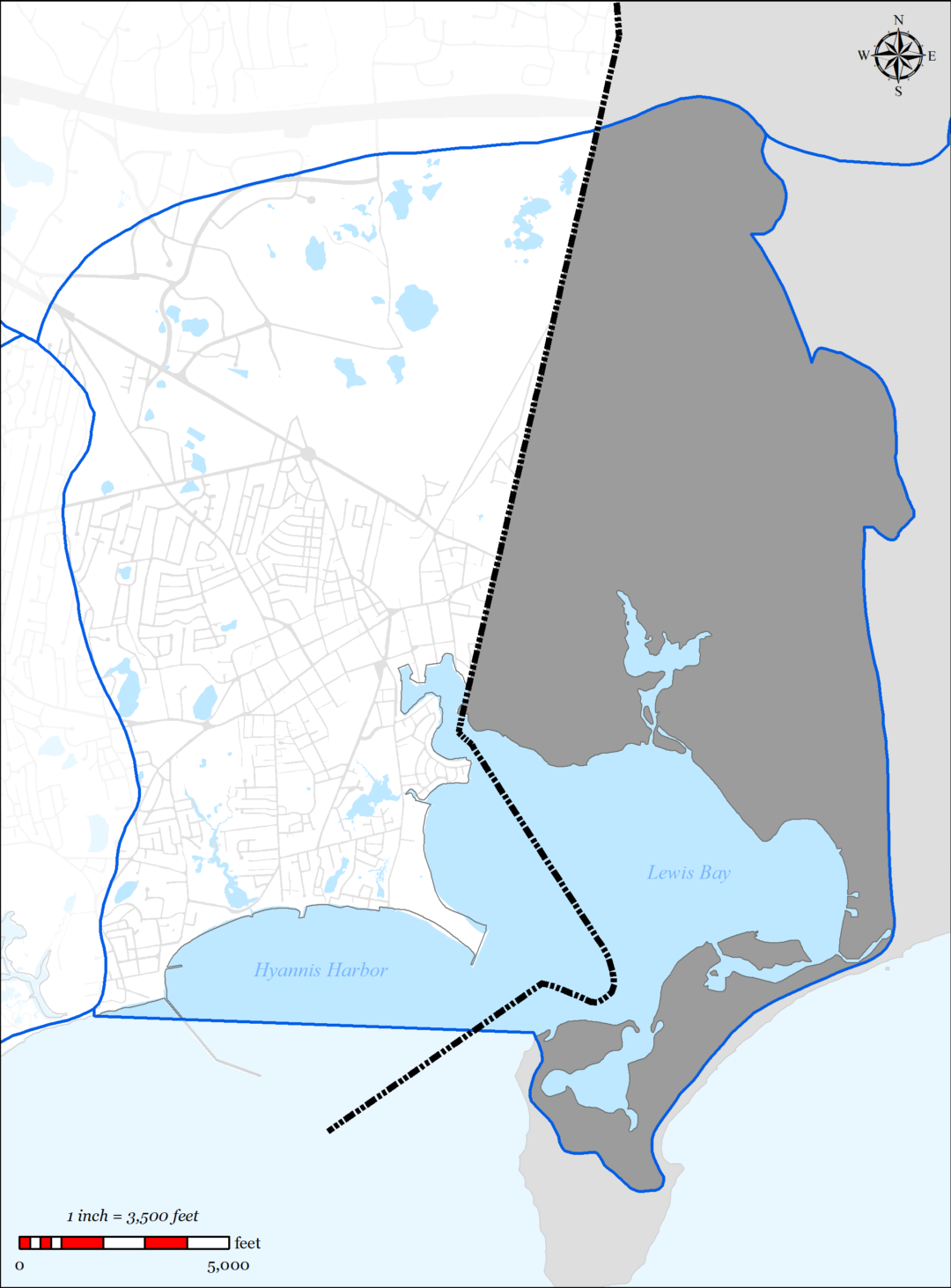 The Lewis Bay Embayment System is a complex estuary located in the Towns of Barnstable and Yarmouth with a southern shore bounded by Nantucket Sound. It is comprised of several primary segments that include Hyannis Inner Harbor, Mill Creek, Snow’s Creek and Stewart’s Creek. For a detailed description of the embayment system, refer to the 2006 MEP Report for the Lewis Bay Embayment (Appendix AA).

The Lewis Bay Watershed is the contributing area for the Lewis Bay Embayment System. The Lewis Bay Watershed is also located between the Towns of Barnstable and Yarmouth (see Figure 5-2). Within the watershed there are 71 identified surface waters including 8 named freshwater ponds and 6 significant freshwater stream outlets (Halls Creek, Stewarts Creek, Snow’s Creek, Hospital Bog, Mill Pond and Chase Brook). Halls Creek Watershed is discussed separately in Section 5.2.2. There are 22 public drinking water wells located within the watershed, 10 of which are located in Barnstable (8 operated by Hyannis Water District, 2 operated by Barnstable Water District.) The Town of Barnstable Water Pollution Control Facility (BWPCF) is located within the watershed. Additionally, the BWPCF treats and discharges wastewater from portions of Hyannis Village and Barnstable Village. The BWPCF is permitted for maximum daily flow treatment of 4.2 MGD and disposal of 2.7 MGD and an annual mass nitrogen load limit of 49,315 pounds per year.

Barnstable has already taken significant action to address nitrogen removal within the watershed via the Stewart’s Creek Sewer Expansion project (refer to Section 2.3.3.1) which connected 288 of residences to municipal sewer, resulting in a reduction of approximately 1.4 kg/day-N of un- attenuated septic load.

The Town’s wastewater plan has been designed to exceed the existing septic load removals suggested in the 2008 MEP Report’s threshold loading scenarios using traditional sewers. The Town also intends to pursue the feasibility in reducing nitrogen concentrations in the effluent of BWPCF by constructing denitrification filters.

The Town retained SMAST to re-model the watershed under a scenario that combines the proposed Town of Barnstable and Town of Yarmouth’s wastewater plans to confirm that the TMDL will be met by the implementation of the two community’s plans. The updated SMAST model which indicates that the TMDL will be met under this scenario (refer to Appendix OO). The Town of Barnstable anticipates that the two communities will pursue a watershed permit for the Lewis Bay Watershed.

Integral to the planning process was the Town’s development of a wastewater planning GIS tool which allowed Town staff to spatially map traditional Title 5 concerns such as small lot size, depth to groundwater, existing septic variances, existing known failed septic systems, and systems within Zone IIs. Parcels with area less than 0.25 acres were flagged because they were considered difficult to site a traditional septic system, likely to need septic variances, and increased density leading to increased nutrient loading. Parcels with an average depth of groundwater of less than four feet were flagged as likely to require raised systems which are costly and less desirable for community aesthetics. Existing septic variances and existing known failed septic systems were also mapped.

The tool allows the Town to overlay these layers to identify the “hot-spots” for traditional Title 5 concerns. These areas were then incorporated into the plan where practical. Many of these “hot- spots” overlaid other needs such as nutrients and pond protection. The Plan for the Lewis Bay

Watershed significantly address traditional Title 5 concerns as shown in the data presented below which was calculated using the Town’s wastewater planning GIS tool (this data does not account for attenuated nitrogen data):

The majority of the parcels within flood zones in the Lewis Bay Watershed in the Town of Barnstable are already served by municipal sewer.

The Hyannis Water System (HWS) supplies drinking water to the majority of the parcels within the Lewis Bay Watershed. In recent years, the HWS has had significant issues with CEC’s, specifically PFOS and 1,4-dioxane. The Town has been proactive in addressing this issue by investing significant capital to update treatment facilities for the HWS, specifically at the Mary Dunn Wells (activated carbon filters) and the Maher Wells (construction of $12 million treatment plant to treat for PFOS, 1,4 dioxane, iron, and manganese).

The Plan continues the effort of protection of the drinking waters source. The sewer expansion will connect 265 properties that are located within delineated Zone IIs to municipal sewer. Of particular concern is the “Old Yarmouth Road” project area which is directly adjacent to and up- gradient from the Maher wellfield. The existing land use within this area is predominantly commercial. The majority of the commercial uses are motor vehicle dealerships and repair facilities which are land uses susceptible to hazardous material release. The proposed Old Yarmouth Road Sewer Expansion project will connect the 131 properties within the project area to municipal sewer, thus reducing the risk of contamination from the commercial uses existing in this area.

The Town’s wastewater planning has included detailed studies of ponds 3 acres or larger throughout the Town. Through those studies, there is extensive water data for 9 ponds in the Lewis Bay Watershed. Pond classification of these ponds is shown in Table 5-4 and Table 5-5.

Five ponds within the watershed have been identified as impaired; Lamson Pond, Israels Pond, Fresh Hole Pond, Flintrock Pond, and Schoolhouse Pond. Sewer expansion adjacent to the following ponds for protection from nutrients from septic systems has been proposed.

The Town’s Planning and Development Department (P&D) identified a number of areas within the Lewis Bay Watershed as needs areas for sewer expansion to promote economic development. These areas include:

The plan addresses the needs areas using the following techniques:

are already connected to municipal sewer.
o 241 parcels (5%) in the watershed within the Town of Barnstable were included in the Stewart’s Creek Sewer Expansion Project (1.4 kg/day–N, un-attenuated).

 BWPCF Upgrades
Evaluate, design and construct denitrification upgrades to decrease BWPCF total nitrogen (TN) from an existing average of 6 mg/L to a proposed average of 3 mg/L or lower.

o Seek effluent discharge sites to accommodate additional flow being generated by the sewer expansion connections being treated at BWPCF.

o The sewer expansion plan has been designed to remove septic load than above and beyond what modeling required for existing conditions in order to accommodate projected growth within the watershed.

 Adaptive management and monitoring
o The Town will continue to monitor the embayment, review the Plan and provide formal updates as required.
o Refer to Section 6.4 for the Adaptive Management Plan and Section 6.3 for the Monitoring Plan.